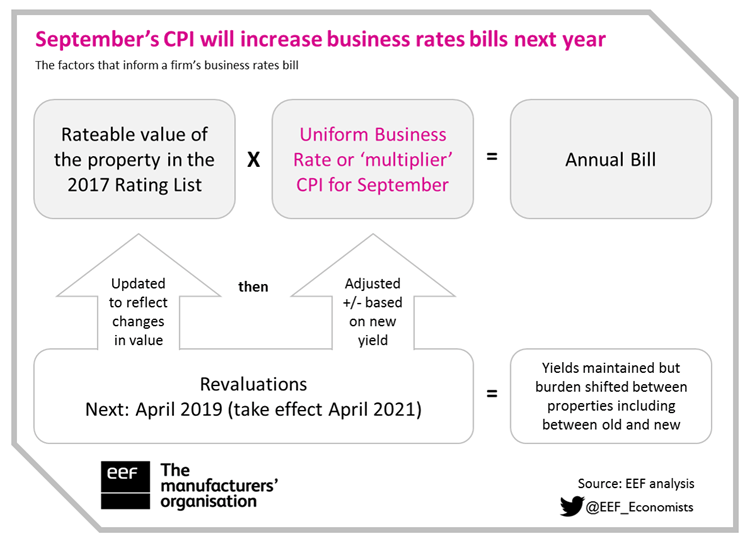 Policy on business rates is devolved to Scotland, Northern Ireland, and most recently Wales, so there is some divergence – the comments below relate to the system in England.

Companies occupying properties below £12,000 in value were permanently removed from the system following a Government review. 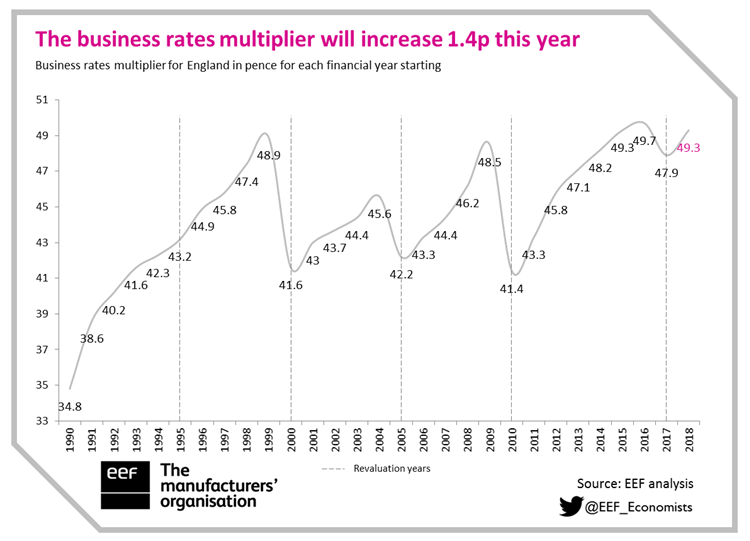 The multiplier is usually uprated by taking the Retail Price Index figure from the September of the preceding year, but action was taken at Autumn Budget 2017 to switch this to CPI from April 2018, fulfilling a long standing EEF policy ask.

What else has been happening on business rates?

Spring Statement 2018 confirmed that the next revaluation in 2021 will be the first to move to 3 year cycles rather than stick with a revaluation every 5 years.

This move comes with a potential sting as businesses will be taking on more of the administrative burden of doing their own ratings assessments (or paying someone to have this done). This would also come with the additional risk of penalties for getting it wrong.

What do manufacturers think about business rates?

The system is also punitive in that it actively discourages new P&M compared to old. When making an assessment the value is taken into consideration with new P&M having a higher value and therefore carrying a higher tax liability.

The Government has recognised the inclusion of P&M as an issue. Recent legislation has been passed to exempt new full-fibre digital infrastructure from the P&M regime as upgrading from copper infrastructure (low value due to age) to fibre (higher value) would disincentivise providers making investment.

The OBR also previously looked at this in the run up to Budget 2016 and highlighted the investment benefit of removing P&M from business rates.

So the principle that P&M discourages investment is recognised by HM Treasury.

A bigger problem coming down the track

The chart above shows what happened at the 2017 Rating List, a very small fall compared to previous revaluation years. Why?

As the use of floor space for business purposes declines (driven in part by a switch from high street to online retail) this will see the fixed business rates yield shouldered by fewer and fewer properties. Ironically a switch to 3 year revaluations is likely to speed up the impact.

With the increase coming on April 1st, calls for full reform of the system will only grow.

Rather than continuing the piecemeal approach to reform, the Government will need to bite the bullet and do a full review of business use of property and the interaction with the tax system to get in front of the looming crisis surrounding who pays.