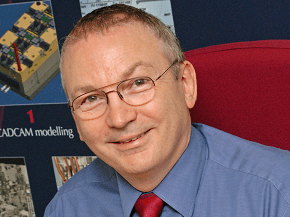 Gareth Jenkins, the Managing Director of FSG – Tool & Die Ltd and former Welsh president of EEF, shares his views on future skills based on his rich experience in manufacturing.

What is your view on robotics and automation and their impact on manufacturing?

Back in the early 80s I was studying with the Open University and I did my thesis on automation and robotics, which was also very topical at the time because the first generation of robotics was being shown on television and additionally there were a lot of issues surrounding industry, unionisation, and employment. In my dissertation, I picked up on the fact that there’s no need to worry too much, because increased productivity doesn’t necessarily mean you end up employing fewer people. I was mostly derided by those comments back then for being unrealistic, but that was the situation as I saw it in the business I was working in at the time. I think robotics and automation are things to be embraced, not feared

I now run a high value-added company, 100 employees, of which 70% are degree-level engineers. We’ve had a level of automation since 2004 that did not result in job losses. It made us more productive and it meant that we could divert highly-skilled labour to other areas of the business (like R&D) to good effect.

What role does skills development play in future productivity?

As UK manufacturing moves forward I think the skill level will rise. The demands of the job, for example, put people at a foundation degree level. We are updating our apprenticeship training program to reflect current conditions and demands. It’s possible it will be extended to six years instead of four because of academic and hands-on experience required to do the jobs of the 21st century.

We’re now also seeing a need for high degree of skills diversity. Single skill jobs will become extinct so companies and employees need to be willing and able to upskill and reskill.

What role do leadership and management skills play?

What I hear a lot from government, academics and other companies is that it is leadership and management skills that are lacking. If you’re an SME with around £8-9 million turnover and 15% export, the challenge of leading and managing this sort of business, even regardless of Brexit, currency exchanges and dealing with foreign countries, are considerable and the demands on leaders are increasing beyond what we are currently trained for.

The proposed 6-year apprenticeship programme that EEF is developing for us takes that into consideration and includes leadership training. This is something new – exposing young people to what leadership is actually about: leading people and leading processes.

What is leadership to you?

Leadership is a multi-faceted skill, it’s not just leading a group of people. Engineers sometimes lead projects, processes, research and development – leadership in its many forms is an integral and vital part of working life and is a demand from people, though this may bring with it certain challenges to businesses.

We run a program called “The Future Leader”, developed with EEF and delivered by EEF, which we open up to newly qualified apprentices on a volunteer basis. In most cases in the past five years that it has been running it’s been over-subscribed. We are also now incorporating elements of that into our regular apprenticeship program.

What is the main obstacle with developing future skills?

I’m not sure government and academics fully understand the issue of future skills. I think part of the problem is people’s perception, especially young people, of what wealth creation actually is. It’s not about moving money from place to place. Wealth creation is when you take something that isn’t worth much inherently and you add value to it. A simplistic example is farming, where you take seeds, put it in the ground, make it grow and you get crops.

The motivation to address should be centred on what is wealth creation. Future skills should enable us, using our brains and our technology, to transform one thing into another, creating something much more valuable.

Provide your workforce with the right future skills - Explore our range of leadership and management and technical skills training courses.