When delight turns to despair

When the Government finally published its Immigration White Paper in December 2018, setting out plans for a post-Brexit migration system, manufacturers were delighted to see that the Government proposed extending the definition of “skilled” to include technician level roles, and not just graduate level roles, like we see for the non-EEA system. Our deepest concerns that the new system would mirror that of the current non-EEA system seemed to be allayed as manufacturers would be able to recruit engineering technicians, toolmakers and welders from outside of the UK in a post-Brexit world.

However, turning a few more pages revealed that the Government was proposing  a minimum salary threshold of £30,000 be applied, meaning that employers recruiting non-UK workers would have to pay this as a minimum to be allowed to give them a job..

Imposing this threshold mean the move to extend the definition of skilled is of no value. Given the Government has said it will “consult” on this increasingly controversial proposal, we have been undertaking our own analysis, using our extensive workforce pay benchmarking data. And what we see is some increasingly alarming figures, which should act as a wakeup call to Government.

The majority of non-professional roles wouldn’t make the cut

What (may) work for Westminster, doesn’t work elsewhere

Then let’s look to the regional breakdown which clearly shows that a policy that (sort of) works for Westminster does not work for the rest of country.

Take a Design Draughtsperson for example. They are definitely a definition of “skilled” tasked with designing and modifying components, undertaking technical calculations, and drafting technical specifications using CAD/CAM systems (see why I said they are skilled).

In London, 37% of employees in these roles wouldn’t hit the £30,000 mark, and this increases to 67% in the North West and 86% in Yorkshire and Humber. We can see similar trends for other occupations such as Maintenance Fitters and Electrical Technicians.

There are some job roles that would be completely at risk, job roles that are widespread across manufacturing such as CNC operators and Welders. For these employees, pretty much across the board, they won’t make the cut when it comes to hitting that high salary benchmark. 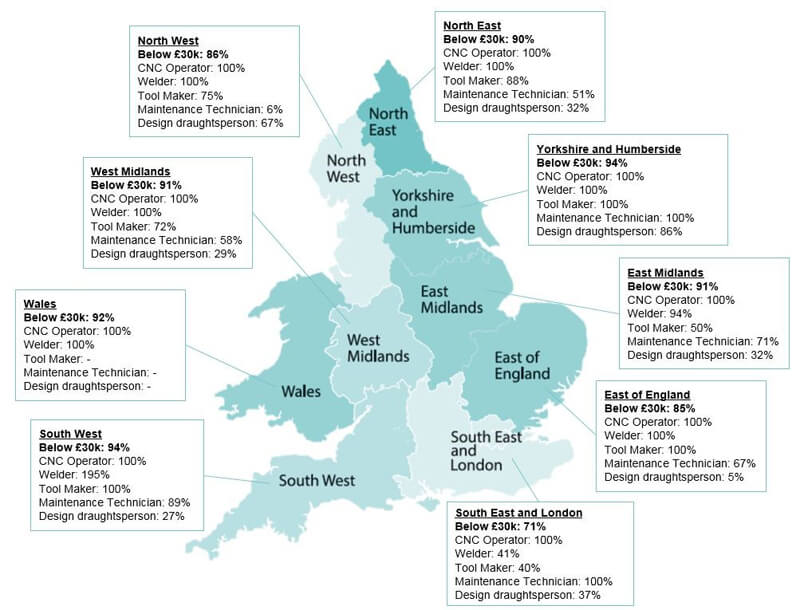 Government’s argument for imposing a salary threshold is that it wants to ensure that employers are essentially prioritising domestic workers. But, we know the main reason that manufacturers currently employ EU nationals is because they don’t get sufficient applications from UK nationals. A salary threshold won’t fix this, it will simply restrict employers’ ability to recruit the people they need.

And it doesn’t stop there….

There are a number of other proposals which are alarming to manufacturers, including the proposed temporary work route. The proposed new system would mean that EU job seekers looking to fill lower-skilled roles in manufacturing such as plant and machine operators would only permitted to come into the UK to work for a maximum of 12 months with a 12 month cooling off period. Hardly any time or incentive for an employer to train those jobseekers up. And what about if the employer wants to promote them, as they see their education attainment is high? Well I’m afraid that can’t happen because this route won’t allow for switching.

We’re already facing a cliff edge when it comes to the skills shortage in manufacturing and policies like this are set to tip the industry right over. It’s about time, the Government takes on board real evidence like this and stops proposing damaging policies that will have significant impacts on the UK economy.

You can check out more of our thinking, in our full Immigration White Paper analysis.