How does your company measure up on Labour Turnover?

What is labour turnover? It’s a calculation that looks at the ratio of people leaving an organisation (usually including retirement, redundancy, dismissal, or people choosing to move on), relative to the total headcount over the year. Our report also includes labour turnover excluding redundancies.

When redundancies are removed from the sample, we see a labour turnover of 13.7% for UK manufacturers, also an increase from the year before. 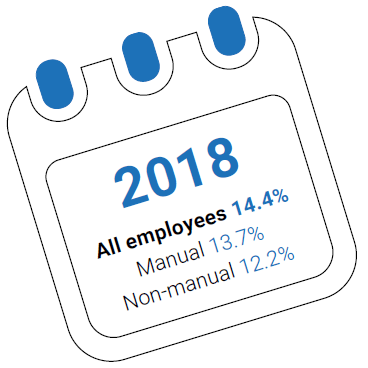 There’s more than the national picture

The UK manufacturing sector is a varied one, with differences between subsectors, as well as between companies of different sizes, and from different parts of the UK. For instance:

What’s behind the rise?

This year was only the second time that we have information about labour turnover excluding redundancies. We can see that this figure has risen noticeably year-on-year, at a slightly higher rate than the overall labour turnover, implying that the churn consists of more leavers than redundancies.

The current labour market favours workers. This month’s figures from the ONS revealed that the employment rate is 76.1%, the highest since records began in 1971, and that the unemployment rate is down at 4%, the lowest since 1975. This is putting pressure on companies with vacancies as they struggle to find applicants. This will add a particular sting for the manufacturing sector which is already suffering from a well-known and long standing skills shortage.

With high employment across the nation, companies need to make sure they are offering good pay packages to pull in and retain the employees they want and need. Make UK produces several reports that can help manufacturers benchmark themselves against other companies in their sector and region. We also produce a monthly Pay Bulletin that looks at annual pay settlement rates so you can make sure that your company has evidence of manufacturing sector pay for negotiations.

For information about our benchmarking reports get in touch with our Information & Research team: [email protected]