After the excitement of our Annual Conference and the new brand reveal, we are glad to present Q1 2019 Manufacturing Outlook– the first under our new Make UK brand.

Output and orders are at very similar levels to those reported a quarter ago when orders in particular suffered a very sharp contraction.
For the second quarter in a row, output balance was much stronger than orders and this appears to hint at the fact that at least part of the production is related to stockpiling activities rather than output driven by actual demand.

This is consistent with what we also see from other surveys, such as Friday’s PMI, which shows that stockpiling activities at the highest levels since record began.

In our most recent Annual Executive Survey, we also showed how in December two thirds of manufacturers had already begun or were ready to stockpile raw materials, components and finished goods. 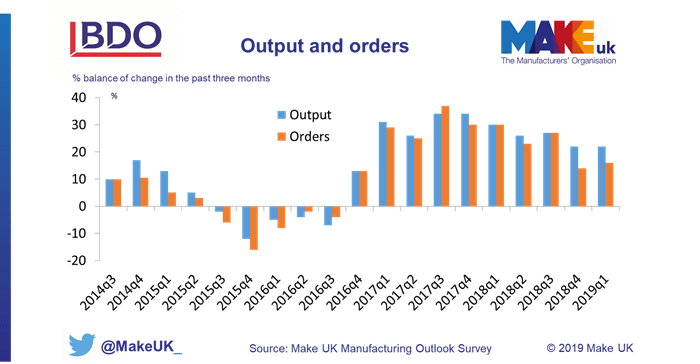 Stockpiling is definitely a major story, however what is happening to demand from abroad is not any less important.

As you might remember, in the last quarter we talked about export orders showing a balance half of what it was in Q3 and a third of what seen at the end of 2017. This quarter showed no clear signs of recovery.

For the first time since 2016 Asia is not amongst our top three markets chart. Its place has now been claimed by the Middle East, not much as a reflection of what is happening to demand from that market, but more as what happened to demand from Asia and particularly China.

Official data are pointing to a significant downward trend for imports from the giant of the Far East, with appetite for UK and European manufactured goods down from the peak that was registered in recent times.

The slowdown from the Asian and European markets seems to be related to the economic slowdown happening particularly in the eurozone, as well as in China. This slowdown also appears to be related to Brexit uncertainty. Indeed, it appears that orders are on hold, with importers worried that their goods may be stuck at ports or not able to pass the border and able to exploit the current EU Free Trade Agreements that the UK benefits from as a member of the bloc. 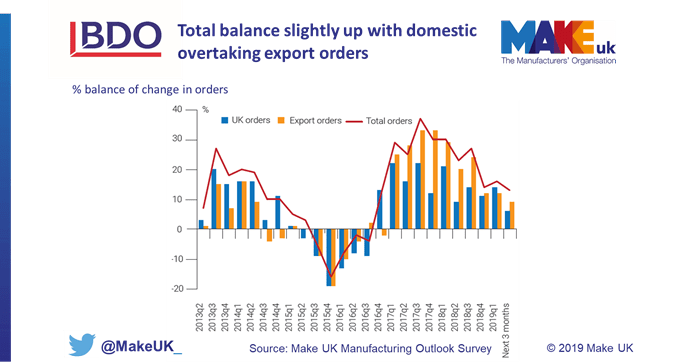 In the last quarter, prices were up but not margins. This was due to producer prices hitting manufacturers hard. Indeed, looking at official data PPI touched a double digit growth around summer time due to oil prices growing in the first three quarters of 2018.

This time the picture is different. Indeed, prices and also margins are up. This is once again related to input producer prices which, thanks to the sharp decline of oil price in the last quarter of the year, became more manageable allowing manufacturers to enjoy better margins, in particular in the export market.

Looking at the next three months, it seems that manufacturers are pricing in some more price pressures coming from a potential no-deal Brexit and they expect prices to rise but margins to stay flat.

During the week, we will also publish another blog talking more about the macro situation and our forecasts for the UK economy and its manufacturing sector.