Time to finish the job in fixing local roads – ALARM 2018 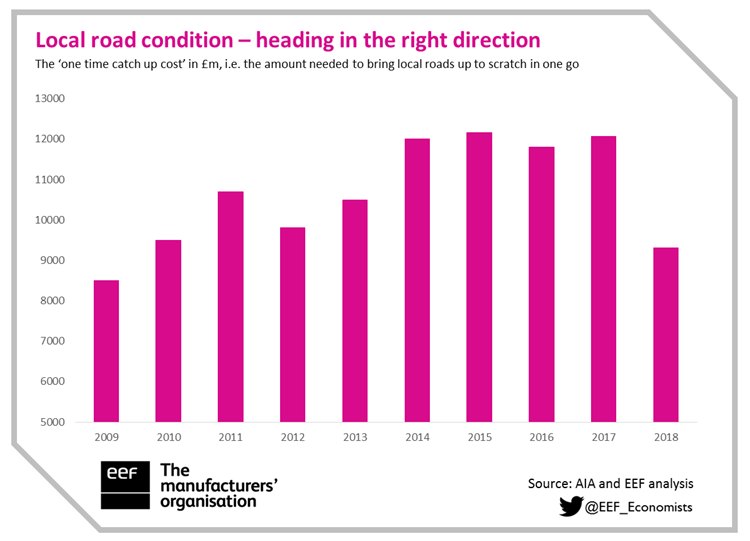 The report finds that this fall is driven by over half of local authorities transferring funds from capital budgets (meant for improvements) to supplement revenue budgets (used for maintenance). Revenue has historically been underfunded and is impacted by central government fiscal consolidation and balanced budget restrictions (capital is not as it is ‘investment’).

Similarly, funding from the Pothole Fund (announced in April 2016) and other short term sources has helped to provide stop-gap funding to address immediate concerns.

The survey was completed before the recent spell of bad weather which will have a double impact of both halting maintenance work (previous National Audit Office reports show most road maintenance work happens over winter), and hastening the decline in road conditions.

Even before this recent run of snow the report found that: "Overall, 20%, or one in five local roads, is now rated as poor – having less than five years of life remaining. This is equivalent to 40,082 miles of the local network."

Additionally, EEF's 2017 Infrastructure Appraisal showed minor roads and primary roads were the top two networks rated as having declined in quality the most over the previous two years.

The decline in the one-time catch up cost, while a success, puts us back to where we were almost a decade ago with local authorities struggling to fix roads as budgets are squeezed, inflation increases and traffic volumes rise.

Action is needed from both central and local government to ensure this decline is sustained and not just a one off blip.

What needs to happen now

Local roads matter to manufacturers, helping to link factories that are the lifeblood of towns and villages to key customers and markets and supporting access to talent.

With 20% of local roads having less than five years of life remaining, the Government must press ahead with more sustainable funding for the most critical A-roads through ring fenced funding from the Roads Fund as part of its Major Road Networks proposals.

Local authorities also need to act and recognise today's report as another sign of the need to move to a more sustainable financial model and move to create larger unitary authorities across England.