What does the new immigration system mean for manufacturers?

After months of speculation, it’s out – the Government’s blueprint for a future UK immigration system starting on 1 January 2021.

The headline is that skilled and highly skilled workers will be able to come and work in the UK labour market – the unskilled will not. Despite all the speculation, there is no route at all for those without some qualifications to work in the UK. The once mooted 12 month temporary route for low-skilled workers has been removed completely.

What is the definition of skilled and highly skilled worker?

Skilled worker means those with a level 3 qualification – so, our A levels and equivalent; for manufacturers, higher-level technicians and engineers should find a place in the new system. Encouragingly, there’s plenty of reference in the new policy to STEM and engineers needing to be included, after much lobbying by industry bodies like Make UK.

What about salary levels?

The general entry level will be £25,600, or the “going-rate” for the job, whichever is the greater. (See the end of the blog for a not-so-technical explanation of what this means.) But the new system has some flexibility in it, so jobs paying less than £25,600 could still be filled by a non-UK worker, if the the worker can make up points with other qualities; but, the absolute minimum salary for an migrant worker will be £20,480. This is lower than the initial £30,000 first floated and therefore another win for organisations such as Make UK.

Will there be a cap on numbers?

The announcement says that the cap will be “suspended” – so the cap is not scrapped, it’s just not going to be enforced, but there’s no indication for how long this will apply for.

What about younger workers, who may earn less?

There is a slightly easier route for new entrants – those aged under 25. The salary threshold for this group is 30% lower than that for experienced workers (that is the £25.6K/going-rate benchmark). This could be good news for manufacturers, who may be able to attract skilled, younger, workers who may then need to top-up with some sector specific skills. This route is likely to come with some sun-setting – in other words a time limit, possibly 3 years or so.

So what’s all the reference to a points-based system (PBS) mean?

At the end of this blog is the published points grid – 70 points will be needed to be eligible to apply. Breaking this grid down, for manufacturers it means this –

• Everyone needs a job offer, a level 3 qualification, and a good level of English: for these three attributes, the applicant will get 50 points
• If the job pays £25.6k, or the going rate, they get another 20 points, giving them the magic 70
• If the job does not, but they get at least £23,040, they’ll get 10 points; if they get less than this, then they’ll get no points for their salary level
• This could then leave the worker 10, or 20 points short
• If the job is on the shortage occupation list, then this attracts 20 points – giving 70
• If the worker has a PhD, but not in a subject relevant to the job, they get 10 points
• If the worker has a PhD in STEM, relevant to the job, they get 20 points

What does this mean in practice?

It means that for most manufacturers, they’ll need either to be paying £25.6k/the going rate, OR the job needs to be on the shortage occupation list – and even for these jobs, the role will need to be paid at least £20,480. Whilst it’s possible that the worker will have a STEM PhD, and make up any points needed this way, for most applicants this is unlikely.

Is there any logic to this points-based system?

Some. Those keen on maths, hopefully many readers interested in STEM and manufacturing, will notice the pattern in the numbers. The general salary level is £25.6k – if you reduce this by 10%, then you get to £23,040. If you reduce the general salary by 20%, you get to £20,480. So, if you’re 10% below the required salary level, then you need to make up 10 points; if you’re 20% below then you need to make up 20 points. The maths then adds up, but perhaps not the impact.

What if I don’t pay £25.6k/going rate, and the job is NOT on the shortage occupation list?

Then the worker will be short by either 10, or 20 points – so they’ll need to have a PhD level qualification, or they won’t qualify.

Is this it for now? Will more information be released?

For the fundamentals of the system, this is all we expect for now, but there will at some point be detailed new rules and further announcements on how the mechanics of the system will work, including what the fees and charges will be.

Does everyone need a job offer before they can apply?

For the skilled route, yes. There is another route, called Global Talent. This is for the most highly-skilled, endorsed by their relevant and competent body – for example, medics or scientists. These workers won’t need an employer-sponsor, but are unlikely to be filling the roles manufacturers need filling now, or perhaps, ever.

What about consultants – the self-employed – is there a place for them in this system?

No. There is no dedicated general route for the self-employed. There are some limited routes that exist and will continue, but these are of no help to manufacturers – for example, entertainers and musicians.

What does Government expect employers to do?

In short, adapt and change – to invest more in UK based skills, to automate and invest in new technology. The new system will start in January 2021 and will open for applications from the autumn of this year.

What about business visitors?

The news is not encouraging. Everyone coming to the UK for work will need permission to enter – this includes business visitors – so, the days when EU nationals simply got on a train or a plane and came to the UK for a business meeting, to service or fix a machine, or for training, will be at an end. They will not need a visa, but will need what the announcement calls “permission in advance” – everyone will need permission in advance of travelling to the UK, and will need to make an on-line application.

What about right to work checks for employers?

They will need to change – the announcement is a little unclear, but it seems to say that employers will still be able to accept passports until 30th June 2021 for EU nationals in the UK before December 2020 – but those arriving after this will be issued with an e-visa, following an application, that will be checked via the Home Office online checking service. How employers will be able to differentiate between new arrivals, and those who live in the UK, pop over to the EU for a visit, then return in say, January 2020 is unclear.

I don’t understand all of this – what’s MAKE UK doing to help its members?

We have a series of national seminars, starting in April – click here to learn more. We’re covering the current rules that apply if you’re sending a UK worker to the EU to work, giving all delegates a MAKE UK guide on this, and will also be covering the new UK immigration system. 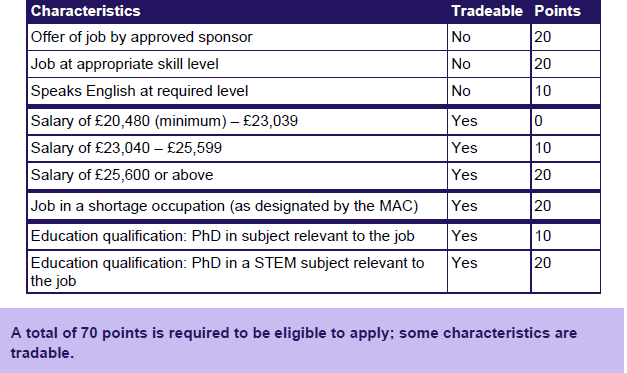