Preparing for Brexit: Deal or No Deal

Preparing for Brexit: Deal or no Deal published by Make UK and Squire Patton Boggs explores the impact the Brexit delay has already had on manufacturers with most already reporting significant losses, both financially and in credibility terms.

The message to Government is clear:
with just 2% of manufacturers believing a no-deal Brexit would positively affect our ability to do business with the EU, we must do all we can to avoid the irreversible impact a no-deal Brexit would have on UK manufacturing: Make UK calls on the Government to prioritise securing a deal with the EU as soon as possible. 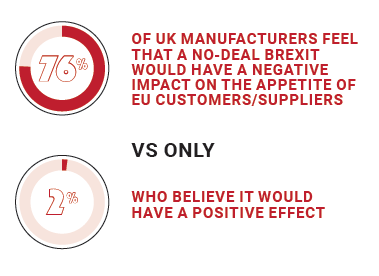 In association with Squire Patton Boggs