He discussed Brexit preparations, the future of manufacturing and Honda's decision to close its Swindon plant in 2021.

Clark said that manufacturers needed more certainty over Brexit arrangements: "The reality is that yesterday the first freighter that will arrive after the 29 March 2019 set off from Felixstowe bound for Japan with no clarity on the terms under which its cargo will be admitted when it reaches its destination.

"That is, I know, unacceptable to you. And it’s unacceptable to me. For me, this shows how absolutely essential it is to conclude the arrangements with a deal in the weeks ahead. And not on the last minute on the 28 March, but as soon as possible." 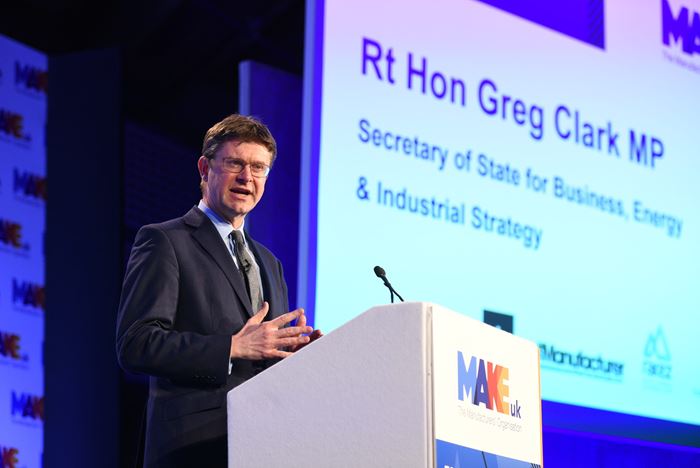 On the Honda decision, he commented: "Our message to everyone affected by Honda’s closure is that we value intensely your skills; we completely understand the challenges that you face; and we will do everything that we possibly can to support every single person in the community, in the workforce, in the supply chain, to make sure that their skills and their ingenuity will find expression and application in the years ahead."

He had praise for the role of Make UK: "I am immensely grateful to Stephen Phipson and the EEF, now Make UK, for the advice and the support they have given on your behalf. This is a membership organisation, and I want you to know that the views you express to the headquarters are deployed forensically and consistently by Stephen on your behalf.

"I meet with Stephen every Wednesday morning for a full hour’s discussion of what he’s found from his interactions with you during the previous week. And it really makes a difference. I can’t understate the importance of the evidence and intelligence that you supply through Stephen to us in our roles."

"The very next month, in October, we announced £120 million to make sure that this diffusion of the technologies that we have in this country to supply chains in every part of industry should be able to be supported. And at the heart of Made Smarter will be what I know is manufacturers’ No. 1 priority – skills."