“Our two nations share a passionate belief in democracy, justice and tolerance. That’s why our Armed Forces deploy on many of same missions around the globe – from countering terrorism as part of the Global Coalition against Daesh to deterring Russian aggression as part of NATO’s Enhanced Forward Presence in the Baltics.
I’m delighted that strong relationship is reflected in the fact that Germany will host the 2022 Invictus Games in Dusseldorf, showcasing the remarkable tenacity and resolve of our personnel.”

The Defence Secretary reportedly also made clear to his German counterpart that the UK remained unwavering in its commitment to European security as it gets ready to withdraw from the EU at the end of the month and underlined the importance of NATO to European defence.

Revolutionary Artificial Intelligence warship contracts announced
The Defence and Security Accelerator (DASA) has announced the first wave of £4 million funding.  The funding aims to revolutionise the way warships make decisions and process thousands of strands of intelligence and data by using Artificial Intelligence (A.I.).
Nine projects will share an initial £1 million to develop technology and innovative solutions to overcome increasing ‘information overload’ faced by crews as part of DASA’s Intelligent Ship – The Next Generation competition, Minister of State for Defence, James Heappey said:

The astonishing pace at which global threats are evolving requires new approaches and fresh-thinking to the way we develop our ideas and technology. The funding will research pioneering projects into how A.I and automation can support our armed forces in their essential day-to-day work.

Intelligent Ship is focused on inventive approaches for Human-AI and AI-AI teaming for defence platforms – such as warships, aircraft, and land vehicles – in 2040 and beyond.

DASA, on behalf of the Defence Science and Technology Laboratory (Dstl), is looking at how future defence platforms can be designed and optimised to exploit current and future advances in:

These key areas of research will look to address the complex and constantly evolving threats to national security.  This work will inform requirements then develop applications essential to the future force in an increasingly complex and A.I. driven environment. Although titled Intelligent Ship, a warship is just the prototype demonstrator for this competition – the project will inform development relevant to all defence equipment and military services.

The competition, currently backed by a total of £4 million over two phases, has the potential to transform the way the Royal Navy, British Army and Royal Air Force equipment platforms are designed, work together, operated and manned by the 2040s.

Military Aircraft:  asked the Secretary of State for Defence, when the four BAe 146 aircraft based at RAF Northolt will be retired from service; when replacements for those aircraft will be procured; how many such replacements will be procured; how much funding from the public purse has been allocated to replacing those aircraft; and whether the RAF Voyager ZZ336 will be used for short haul trips previously undertaken by those aircraft, Minister of State for Defence, James Heappey answered:

The current fleet of four BAe 146 aircraft are planned to be retired from Service on 31 March 2022.  Replacements for those aircraft are currently under consideration as part of normal capability planning.  The fleet of 14 Voyager will continue to support the collective Air Transport task including VIP and Command Support Air Transport tasking.
Armoured Fighting Vehicles:  asked Her Majesty's Government what plans they have to improve the availability of armoured vehicles for the army, Minister of State for Defence Baronnes Goldie stated:

There are a range of programmes in place that will improve availability, reduce obsolescence and improve safety and reliability across the armoured fleet.
The Heavy Armour Automotive Improvement Programme (HAAIP) will provide improvements for the heavy armour fleet including Challenger 2, Challenger Armoured Recovery Vehicle, Titan and Trojan. The HAAIP will deliver a common engine and suspension across all variants which will substantially enhance reliability. In addition, Warrior is being upgraded through the Warrior Capability Sustainment Programme which will significantly enhance reliability.
The Ministry of Defence is also working closely with Babcock to better anticipate maintenance requirements in order to take preventative action and improve reliability. The new Boxer and AJAX platforms will both have a fully integrated 'Health and Usage Monitoring System' which will greatly enhance the Army's ability to conduct preventative maintenance and so remedy faults early.

The table below represents contracts awarded up until 19 December 2019 and only includes direct contracts with suppliers; it does not include other procurement arrangements, for example, the international agreement with Organisation for Joint Armament Cooperation to procure the Mechanised Infantry Vehicle. Extensions to existing contracts and phased or additional investments made as part of existing contracts are also not included. 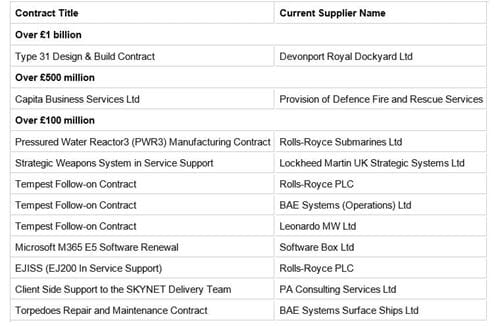 Royal Fleet Auxiliary: Procurement:  asked the Secretary of State for Defence, for what reasons the decision was taken to suspend the tendering process for the Fleet Solid Support Ships on 6 November 2019; and whether this decision has reduced the chances of the tendering process being concluded within the 2019-20 financial year, Minister of State for Defence James Heappey stated:

The decision to stop the Fleet Solid Support ship competition was taken because it had become clear that a value for money solution could not be reached. The Ministry of Defence is currently assessing the options, and as part of this process will review the requirement and any procurement strategy. It is not possible to provide any further details until this work has been completed.

The Multi-Role Vehicle - Protected (MRV-P) programme is being delivered in two packages. The Joint Light Tactical Vehicle (JLTV) has been identified as the preferred option for Package 1, Command, Liaison and Logistic Vehicles, procured through a US Foreign Military Sales case. A decision on the procurement of JLTV is due this year. For Package 2, Troop Carrying Vehicles and Future Protected Battlefield Ambulances, the competition is ongoing. Subject to the conclusion of current negotiations and internal approvals, the competition winner is planned to be on contract later this year.
For the Mechanised Infantry Vehicle programme, a contract was signed on 4 November 2019 between OCCAR and ARTEC. The Ministry of Defence aims to have the first vehicles delivered in 2023.
On the Challenger 2 Life Extension Programme (CR2 LEP), further to the expanded Assessment Phase, work is ongoing and current plans are for an investment decision in late 2020.

Type 23 Frigates:  asked the Secretary of State for Defence, what the (a) original and (b) current timeframe is for the conclusion of the Major Life Extension (LIFEX) programme for the Type 23 frigates; and what additional cost to the public purse has been incurred as a result of a change to the original timeframe, Minister of State for Defence, James Heappey stated:

The Type 23 Frigate class is continually being updated and upgraded to meet new threats or to replace obsolete technology. This is achieved via a Through Life Management Plan rather than any singular Major Life Extension programme.
With regards to the cost of the programme, this draws together a number of capability enhancements and the information is not held centrally and could be provided only at disproportionate cost.