“We welcome the announcement from the Government to launch the Energy Bill Discount Scheme, providing some important certainty and stability for steel producers’ production costs during this extremely difficult economic climate. Steel production is highly energy and trade intensive, and the extended support will provide a critical shield against high energy prices, which will continue this year and beyond.

“However, there will be concerns that the newly announced support falls short of that of competitor countries, including Germany. Today’s reforms significantly narrow the help that Government will provide, with a maximum discount of £89/MWh, which stops delivering once those prices go beyond a ceiling of £274/MWh. The Government is betting on a calm and stable 2023 energy market, in a climate of unstable global markets, with the scheme no longer protecting against extremely volatile prices. The German Government guarantees an electricity price of €130/MWh for the whole of 2023, ensuring German industry can continue to operate competitively within Europe and beyond. In contrast, the reformed EBDS provides a discount for electricity prices above £185/MWh, leaving UK steel producers paying an estimated 63% more for power than German steel producers this year. This situation will maintain a long-standing competitive disadvantage for UK producers, resulting in higher production costs and a reduced ability to compete this year.

“Given the disparity in relief provided in the UK and competitor countries, it is essential that the Government now delivers on its Energy Security Strategy and addresses the outstanding disproportionate costs UK steel producers face in electricity bills, including high renewable levies and network costs. Years of paying more for these elements of electricity costs have placed UK industry at a competitive disadvantage against its European and global competitors.

“Steel demand and prices are falling in the UK and across Europe, while key input costs remain persistently high, leading to reduced production, shrinking market share, and increased imports for the UK. Whilst we are grateful and pleased to see that Government has acted to extend the scheme, there remains a vital gap in that delivery. We urge Government to take the next step and look to match what is provided in Germany for the most energy intensive industries.”

Using predicted future wholesale electricity prices for financial year 2023/24, applying carbon costs, renewable levies, network charges, and government exemptions for the UK and Germany, the electricity prices that a steel company would pay are currently estimated to be £174/MWh for UK steel producers and £107/MWh for German producers: 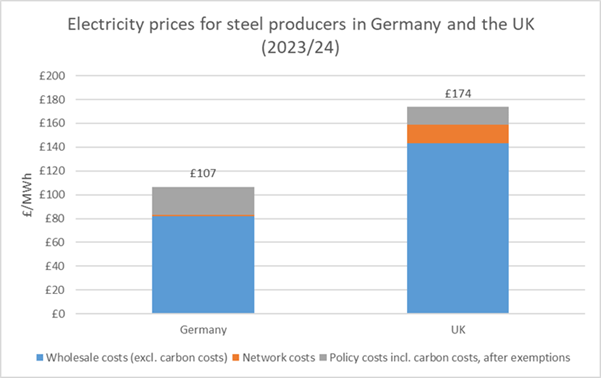 About UK Steel: UK Steel is the trade association for the UK steel industry. It represents all the country’s steelmakers and most of downstream steel processors.

For further information about the steel industry, please see the 2023 press pack.